Destrier Books is proud to announce the selection of Quest of the Warrior Maiden as the Book of the Month for Medievalists.net
for the month of May 2020. 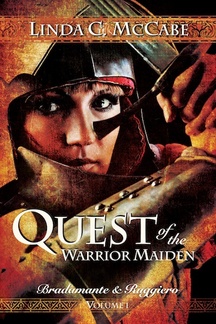 Two cruel prophecies. A warrior with an impossible choice. Will she doom her people or save her love?

Frankish Empire, 802. Christian warrior Bradamante puts honor above all else. But when she meets handsome Saracen knight Ruggiero on the field of battle, forbidden passion ignites. With her lover pledged to the enemy, she fears duty and honor must keep them apart forever…

When a sorcerer imprisons the knight, Bradamante discovers two prophecies about their future with devastating consequences. She can indeed wed Ruggiero, but doing so would seal his death. If she forsakes her love, then she’ll cause the downfall of the Christian empire.

With the fate of her people at stake, will Bradamante choose to doom the innocent masses or the life of her one true love?

Quest of the Warrior Maiden is the award-winning first novel in the Bradamante & Ruggiero historical fantasy series. If you like Arthurian myth, strong heroines, and tales of forbidden passion, then you’ll love this thrilling epic of impossible devotion.

Buy Quest of the Warrior Maiden to battle for love and honor today.

“Rich in detail of the period, fans of the genre will truly appreciate McCabe's intelligence in detailing for her readers the events behind and leading up to the poignant love story between this lesser known couple from legend.”  – bestselling author, Patricia V. Davis

“I read the story in one sitting and was devastated to find out what I had in my hands was only volume one! I look forward to volume two.” – Ibrahim Al-Marashi, professor of History at IE University in Spain.
Autographed copies can be purchased from Kazoo Books

Here are links to order the ebook and trade paperback.