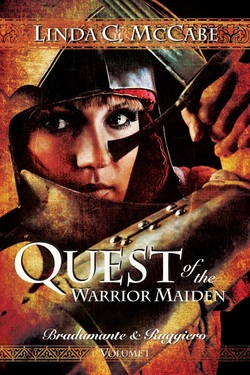 From the dawn of the Middle Ages comes a tale of impossible love between two sworn enemies set against the backdrop of a holy war between Islamic and Christian armies. The legends of Charlemagne come to life filled with chivalry, secret romances, betrayal, revenge and magic. Bradamante, the niece of Charlemagne, and Ruggiero, a Saracen knight descended from Hector of Troy, are renowned warriors who meet and fall in love on a battlefield before being separated.

The heroine, Bradamante, receives the call to adventure from an enchantress who shows her Ruggiero's two possible fates. One is where he is baptized a Christian, marries her, and fathers a child with her, but is murdered before their child is born. His other possible fate has him causing the defeat of Charlemagne and the fall of Christendom. If she follows her heart, her beloved will die tragically, but if she denies her heart so that Ruggiero lives, her family will die.

Dueling magical forces compete with each other to determine which of Ruggiero's fate will come to pass. Quest of the Warrior Maiden is adapted from the classic epic poems Orlando innamorato and Orlando furioso and examines the conflicts between love, war and faith. 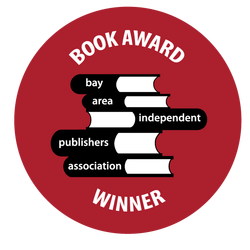 Quest of the Warrior Maiden was awarded the Best Historical Fantasy in the 2013 Bay Area Independent Publishers Association Book Contest
and an Honorable Mention in Genre-Based fiction from the 2014 Hollywood Book Festival.

Book of the Month for Medievalists.net
for the month of May 2020.

“I read the story in one sitting and was devastated to find out what I had in my hands was only volume one! I look forward to volume two.” – Ibrahim Al-Marashi, professor of History at IE University in Spain.

Fate of the Saracen Knight: Volume II of the Bradamante and Ruggiero Series by Linda C. McCabe 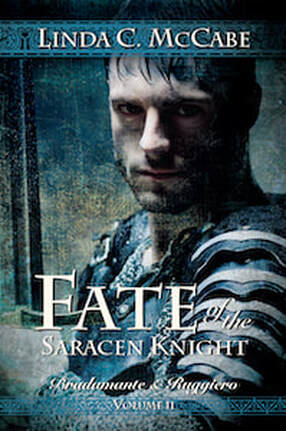 Love binds them. Duty divides them. Victory hangs in the balance.

Frankish Empire, 802. Saracen knight Ruggiero is torn between love and honor. Though he vowed to convert and marry the Christian warrior Bradamante, he refuses to back out of his pledged service — even if that means returning to war against the woman he loves. But if he can’t secure a release from his oaths soon, he knows he'll lose her forever…

Fate of the Saracen Knight is the thrilling second volume in the Bradamante & Ruggiero historical fantasy series. If you enjoy epic journeys, rich descriptive detail, and forbidden passion, then you’ll love this enthralling tale.


“History and fantasy fans will find Fate of the Saracen Knight hard to put down, replete with insights on the effects of war, ideals, and duty on love; the ripples of discord created by threats of infidelity and battle; and the fate of two star-crossed lovers who aren't just manipulated by fate, but used to taking destiny into their own hands by force, if necessary.” — D. Donovan, Senior Reviewer, Midwest Book Review