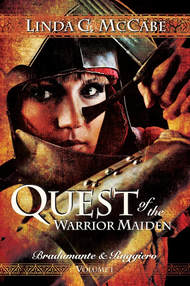 Here are a few questions to help stimulate conversation for reading clubs who are reading Quest of the Warrior Maiden. If you would like to schedule a time for the author to join your club by Zoom please use the contact form at the bottom of this page. I have many pictures from my research trips to France and Italy that I can share with readers.
​

1. How different was it for you to read of a woman receiving a quest in a story rather than a man?

2. Have you ever known someone who fell in love at first sight? Why do you think Bradamante did not question her love for Ruggiero when she had only met him for a brief time before they were first separated?

3. Do you think it was right for Melissa to tell Bradamante to murder Brunello and Atallah? Was Bradamante right for not following Melissa’s orders? What were the consequences of her choice?

4. Did your feelings about the character of Atallah change through the course of the story?

5. Beyond the inclusion of Merlin as a character and a few brief mentions, how do you feel these legends of Charlemagne compare to Arthurian legends?

6. Ruggiero had great pride in his noble ancestor Hector of Troy and sought to live up to the image of the perfect knight. Give some examples of how Ruggiero’s actions differed from the other knights in the story.

7. Doralice witnessed the murder of dozens of her armed escorts and was expecting Mandricardo to ravish and then murder her. Instead, she was surprised by his calm demeanor when he uncovered her in the tent. How else could Doralice have responded to Mandricardo’s advances if she wanted to live?

8. Would Rodomont have been a better husband for Doralice?

9. What consequences, if any, do you think Bradamante will face if she admits to Charlemagne that she murdered Pinabel?

11. Would your opinion of Ruggiero be different if he ignored Amir Akramont’s summons to report to Paris?

12. Having a double prophecy is unusual. Describe your thoughts on how this difference sets this story apart from traditional quest stories of a prophesied youth raised in obscurity saving the world.